ACT sponsored athlete Ross Murdoch reports that training is “going great” as he focuses on the 2018 Gold Coast Commonwealth Games. He has recently spent time in Australia to help prepare for conditions in the Games in April.

Ross, who celebrated his birthday this month, said: “It has been nice to wake up and actually see the sun for more than a couple of hours. When you come to a place like Australia you realise how tough a Scottish winter can be.”

The challenging aspects of his training camp have included the initial travel out and the jet lag that follows long haul flights. He also became very aware of the need to cope with hydration in an environment where temperatures soar to 35C and the pool is salt water.

Some of Ross’s training kit in Australia.

Ross said: “It is all good experience for the Games and it will help me to prepare properly.

“For example, the pool is different to the ones I am used to. The salt replaces the traditional chlorine of our pools and I find this makes staying hydrated while training a lot harder.”

The last few months have seen Ross primarily focused on capacity work in the pool – and strength training in the gym – as he aims to force big aerobic responses in training to control the endurance side of things when it comes to racing in a couple of months.

Now the focus is “preparing to race”. Ross said: “I am working on long course  (50m pool) race awareness and skills, such as stroke rates and counts. This just looks at how many strokes I will take during a race and tries to implement that into my pool work so that when it comes to the big race, I have effectively raced it many times already.

“So far this season I have only raced short course (25m pool) and I can’t wait to start racing long course again. I feel much more comfortable racing long course and that is the format all the major competitions are in so it will be nice to get some more specific race craft work in during this next phase in the lead up to Commonwealth Games.” 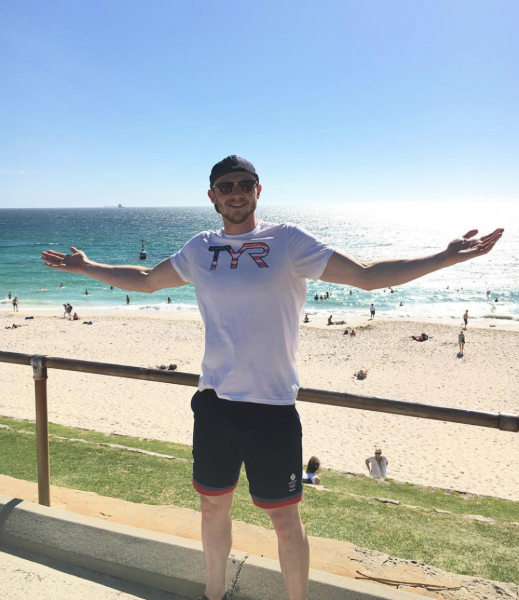 Ross prepares to leave Australia behind for a while as he returns to Scotland again.

As Ross head back to Scotland briefly this week after the Australia training camp his sights are set on a competition in Luxembourg. He will be racing for Great Britain at this Euro meet. He hopes to fit in another couple of competitions before flying out to Australia again mid March.

Ross explained: “One of my competitions will be the BUCS event in February where I will race as a British swimming guest swimmer because I am currently not studying. Being a guest at this meet means I am unable to swim finals but gives me a great opportunity to try to swim fast in the morning sessions just like I will need to do when it comes to a major competition, as it is not always easy to make it out of the heats at these events.

“After this I plan to race at the Edinburgh international meet in early March, which doubles up as the British Swimming championships this year. This will be my final race before the Commonwealth Games and it is the perfect place to finish my race preparation.”

We will be keeping tack of Ross as he trains for the Gold Coast 2018 games.

We are one of the UK's leading specialists in the design. supply and installation of coldstores, fire rated partitions and data centre fit out.

Congratulations on a stellar career @RossMurdoch_ we couldn’t be more proud or happier for you.

An outpouring of emotion from @RossMurdoch_ as he completes the Breaststroke medal trilogy, with the 50m accolade which has eluded him until now!🏴󠁧󠁢󠁳󠁣󠁴󠁿

#TeamACT up & at it today for some team bonding!! 🏇 @ayrracecourse

In celebration of the Queen’s Platinum Jubilee, we will be closed Thursday 2nd June until Monday 6th June.

👑 We hope you enjoy your Jubilee celebrations! 👑

@scottishrugby youth international Murray Godsman thought he’d never play again after having #stoma surgery for #IBD but on May 22 he makes his #TeamColostomyUK & #RugbyLeague debuts when we face @BARA_Rugby in #Batley. Read his story here. https://bit.ly/3vX4QnQ #UpThePurps💜

Check the link in bio for an update on our fundraiser 💙💜

An estimated 500,000 people across the UK have Crohn’s or Colitis. @crohnsandcolitisuk are here for them.

Click the link in our bio to find out how we are supporting and how you can get involved too!